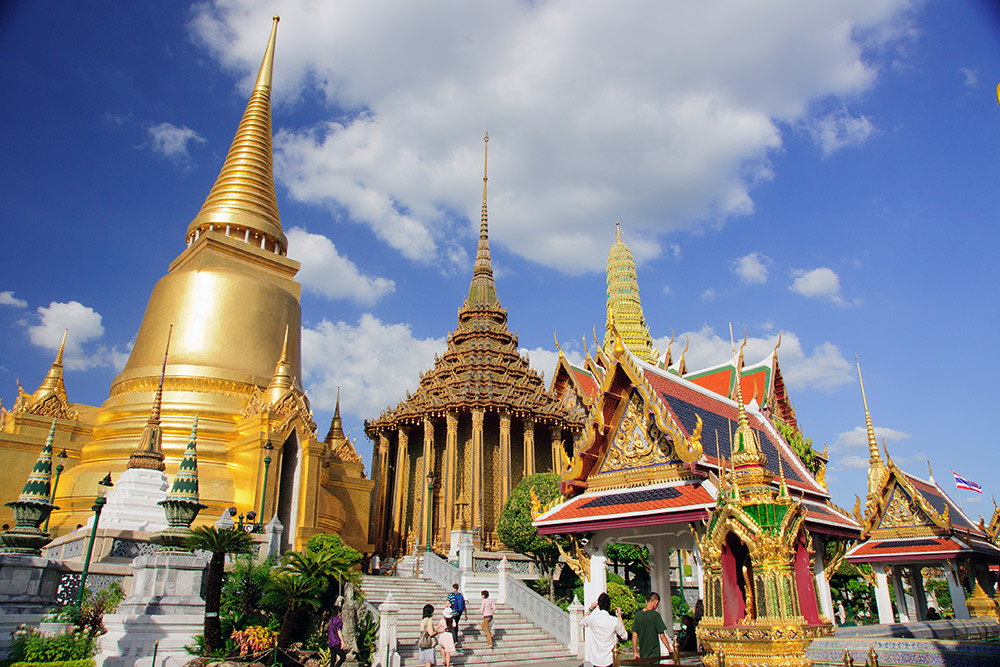 "Identical evidences, they identify that the first discover was placed in Pagoda (Chedi) of Paya temple, Chiang Saen town (now a day , the temple of Pra Kaew Ngam Muang, Muang district, Chiang Rai province). At the first time, it was a cemented cover, lacquered and gilded golden pieces Buddha's character. When monks had intalled the Buddha out of pagoda, instantly, the thunderbolt had striked down to Buddha. That phenomenon had caused cement, which covered all Buddha's body, on his nose breaked appearing jade substant. Abbot had decided to remove the rest of the cement all around his body away until the emerald of his body brightly". The Emerald Buddha, In fact, carved from a huge piece of dark green jade. The word "emerald” means "dark green colored" in Thai, here only). People then flocked to worship this precious image. At that time, the town of Chiang Rai was under the rule of Chiang Mai King. The latter, King Samfangkaen sent an elephant to bring the Emerald Buddha to Chiang Mai. Incredibly, each time the elephant passed the junction to the town of Lampang. They alway ran away from Chiang Mai town to Lampang town. King sent an elephant out three times and each time the same incident occurred. Thus, people thought that the spirits guarding of the Emerald Buddha would like to reside in Lampang. Therefore the Emerald Buddha was allowed to remain in Lampang for 32 years until 1468. When Chiang Mai had a powerful territory by the King named Tiloka, His Majesty had the Emerald Buddha brought to Chiang Mai and, according to one chronicle the image was situated in the eastern niche of a large pagoda called Chedi Luang. In 1551, the King of Chiang Mai, who had no son, passed away. One of His Majesty daughters was married with the King of Laos. Her Royal Highness Princess had borned a son, named Prince Chichettha. After His Majesty the King of Chiang Mai passed away the ministers of Chiang Mai had informed prince, who was a King’s nephew and had fifteen years old, to succeed the King throne. His Royal Highness the prince accepted the invitation. However, when His Royal Highness father, the King of Laos, died, King Chichettha desired to come back his own country, Laos, so in 1552 His Royal Highness returned to Luang Prabang, the capital of Laos, and would like to the Emerald Buddha back with him, importantly, His Royal Highness had promised the ministers of Chiang Mai to come back. Unfortunately, His Royal Highness had never come and sent back the Emerald completely. The Emerald Buddha had placed at Luang Prabang for 12 years. In 1564, King Chichettha could not resist the Burmese army of King Burannuang, thus, His Royal Highness moved away from his capital down to Vientiane and the Emerald Buddha had still remained there for 214 years. 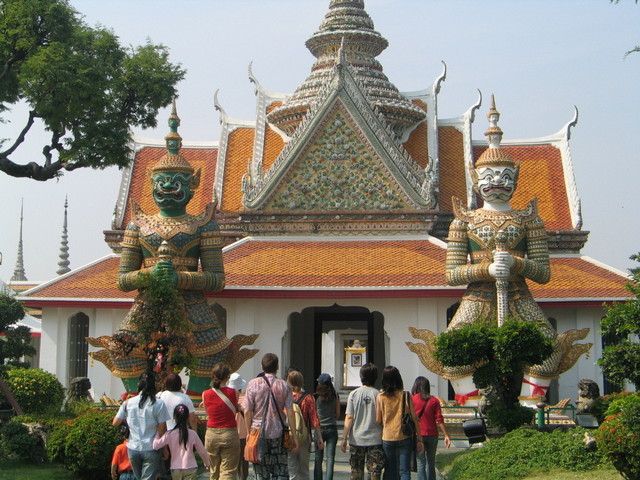 In 1778, when the reign of King Taksin of Thonburi era, while the King Rama I of Bangkok (Rattanakosin era), was at that time a general, he captured Vientianian and brought Emerald Buddha back to Thailand. On establishing Bangkok, the capital of Thailand, the Emerald Buddha became the palladium of Thailandian and has been there ever since. 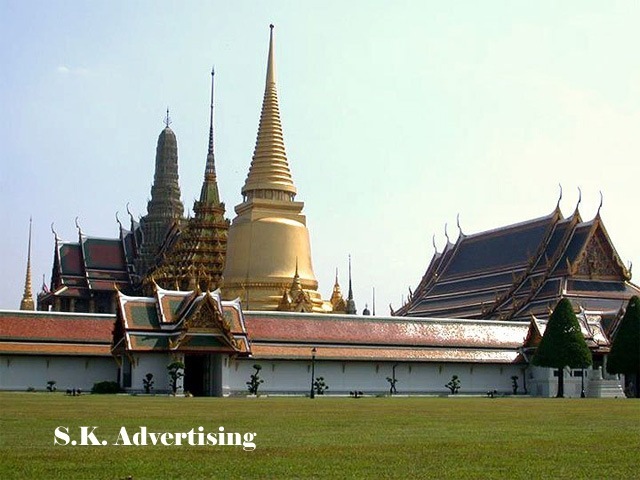 The image was moved from Thonburi to the Temple of Emerald Buddha in Bangkok on 22 March 1784. King Rama I (Pra Buddha Yod Fa Juraroke Maharaj) had two seasonal costumes made for Emerald Buddha, one for summer and the other for Rainy season. Later Rama II (1824-1851) added another one for winter. The ceremony of changing costumes of the Emerald Buddha taken place three times a year when the season changes. In the old day, the King would sprinkle holy water only on the prince and officials who were attending the ceremony inside the temple. Nonetheless, during the present reign, His Majesty the King also sprinkles holy water upon ordinary people who are waiting outside the ordination hall. It can be regarded as a new tradition inaugurated in this reign.
The lap of the Emerald image is 48.30 centimetres or 19 inches wide and the height, including the base, is 66 centimetres or 28 inches. The image is in a sitting position, with the right leg resting on the left. Judging from this iconographic factor, one can determine that the image was carved in Northern Thailand much around the fifteenth century. The image belongs to the late Northern Thais, so to speak, the late Chiang Sean or Chiang Mai. If this is true, it had been made not over before its disclosure in pagoda in Chiang Rai. On the one hand, the Emerald Buddha, which is in the position of meditation, looks much as same as some of Buddha images of Southern India and Sri Lanka, especially those in the resembled posture. The style of meditation has never been popular for Thai people. Thus one might assign the original of the Emerald Buddha to one of the aforementioned countries.